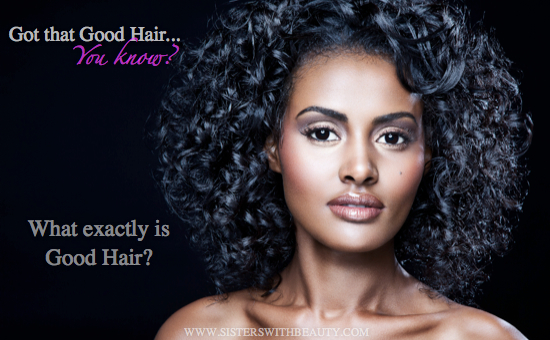 What Is Good Hair?

If you are a women or man of color we have all heard the phrase “Good Hair”, but WHAT IS GOOD HAIR? And where did the phrase come from and why do we still use it today?
Interlude: Grandmother: *touches granddaughter’s hair*
“Ooooh chile!!! You got that good hair from ya’ daddy’s side of the family!”
Good Hair?…. What the heck does that even mean anyways!? Lol
“Good Hair” is a popular term in the African-American / black community, used to describe a black person’s hair that closely resembles the tresses of a typical white person (i.e. soft, manageable, and long: as opposed to it being”nappy” or “tightly coiled” ). The closer your strands are to a white person’s, the “better” it is.  It is typically used to describe black people with softer, wavy, looser-curled, and less kinky looking hair. This type of language stems from a history of colorism and Societal Assimilation due to centuries of being taught that lighter skin, a softer mane and Caucasoid features are somehow more beautiful.
​​
Generations later, why do we still use the term “good hair”? But most importantly, why do we still feel that nappy or kinky strands are considered to be “bad ”?
As far back as slavery, the African American community has always praised lighter skin and looser curls because it allowed us to resemble the standards of European beauty. It is believed that the lighter skinned slaves were treated better and got more privileges. This could be a dishearteningly but large contributing factor to our internalized shaming of darker skin and “nappy” hair.
Over the years the media has also played a huge part in keeping this notion alive. Many entertainers such as Beyoncé, Janet Jackson and Tracy Ross perpetuated the “Good Hair” pervasive cultural messages by elevating loose curls and fair skin as being a form of acceptable blackness. However, there are more entertainers like Viola Davis and Erykah Badu that has proudly represented the “Happy to be Nappy” movement.
“Good Hair” should not be exclusively based on a person’s texture, but rather described as strong and healthy locks grown from the scalp. “Good Hair” is soft and manageable no matter if its curly, wavy, straight or kinky. It is well moisturized, with little to no breakage, in great condition, glossy and lustrous.
As long as a person’s mane is strong and healthy, shouldn’t it all be thought of as “good hair? Hopefully this phrase will eventually go away and stopped being used by the black community like phrases such as “dynamite” and “can you dig it baby?” lol The term “Good Hair” connoting less kinky or less nappy is a trivial misconception and we should stop using it to describe a texture.
​​

One response to “WHAT IS GOOD HAIR?”