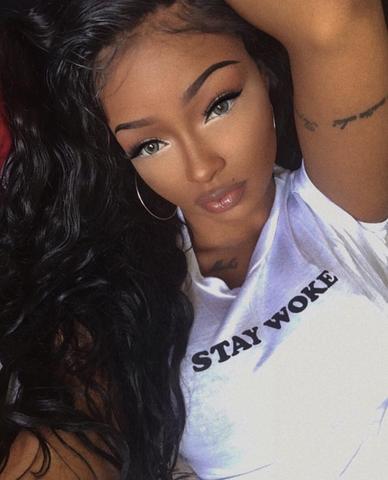 Can I Stay Woke & Wear Hair Weave Too?

A black woman and her hair has held many heated debates over the years. While some argue a black woman is self-loathing and insecure all because she wears a weave; whereas, others feel she is “Too Black” because she’s rocking her natural kinky curly hair. Many might say a Black Woman is Damned if she does and Damned if she doesn’t.
What I want to know is,
why are so many stipulations placed on black women merely based on the way she chooses to wear her hair. She’s considered to be “woke” and uplifted if she “the queen with the Afro pumping her fist” but brain washed and un-confident if she likes to wear hair extensions or wigs.
Now the real questions is, “Why can’t I be woke and wear weave if I want to?” Who says I can’t do both? India Arie said it best, “I am not my hair.”
​​
The way a woman styles her hair does not fundamentally measure her value or her level of “wokeness”. Just because a woman likes to wear hair extensions does not mean she is less knowledgeable or less concern about in the injustices and inequalities of the black community.
​​

Can I Stay Woke & Wear Hair Weave Too?

And it most definitely does not mean she is striving to be “white” or ashamed of her natural hair and beauty. On the contrary, every woman rocking corn rows, braids or dread locs does not necessarily mean she symbolizes what it means to be “Black”. Simple because a black woman prefers to wear her natural hair, we automatically give her the “I’m woke” card and revoke the woman’s with the sew-in. Just because a sister is rocking an afro doesn’t necessarily mean she down for the cause and the movement.
​​
let’s be very clear, women of color wear hair extensions for a plethora of reasons. It’s not always about insecurities, upholding some B.S. Eurocentric standards of beauty or denying ones “Blackness”.  For many black woman, wearing a weave is a form of a protective style. As well as, a way to be creative and experience versatility.
Personally, I think it’s foolish to define a woman or try to grade her value based on the way she likes to style her hair. I for one, like to switch up my hair styles…  A lot!!  Sometimes I wear my natural curly hair and other times I prefer to rock a sew-on or a wig. Does any of this mean I am not conscience or “woke”? No not at all. It just means I can do both, be “woke” and wear weave all at the same time.