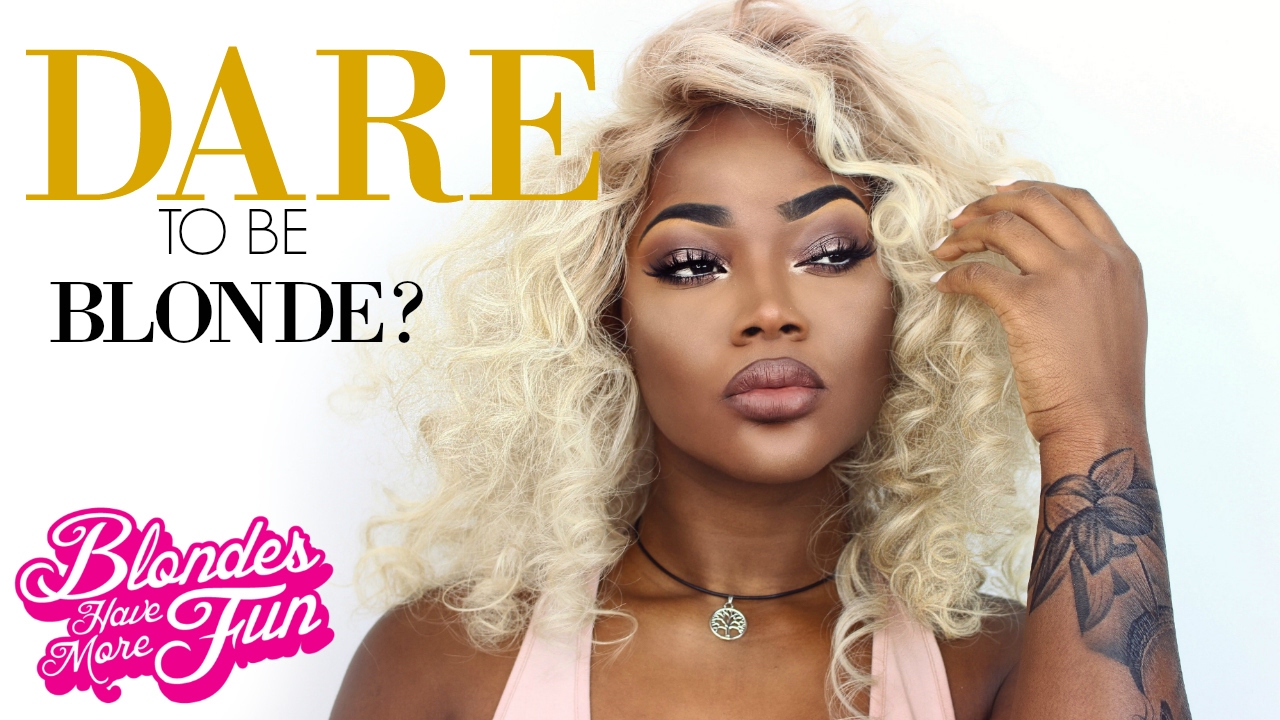 No Seriously, Can They??…. I Mean, Can We???
As a dark girl, I always felt self conscious about blonde hair, I even thought ill of it at one point in my life,but  now a days I’m fascinated by it, I mean its golden, and shiny , then again so is green hair but I digress..I took a pole among the general public (including dark girls like myself )to see what they thought of the subject.
Most people ( meaning 80% ) felt that dark girls look just as good in blonde hair than any other race or shade of color, in fact many people said they enjoyed the contrast of colors of blonde and brown skin. A Colombian gentleman said he enjoyed contrasting colors of a woman’s beauty , and he preferred pale skinned women in his country with jet black hair, just as well as Dark skinned women with bright and/ or blonde hair..
Get Ready,!! 💇💇😜😜……..Now lets get to the 20 percent that were not favorable. Truthfully the 20 percent that were not favorable were ALL dark girls…that’s right, every last one of them. I have to say that this seems skewed, what I mean is, i questioned since it was all dark girls. whether these dark girls think its unattractive because of their own self consciousness? Or is it really how they feel objectively.

Well I went back to every single dark skinned girl that thought it was not becoming of our color shade to wear blonde hair and asked her to answer the question again from an objective view ( in other words as if she wasn’t a dark skinned girl……which i gotta say is REALLLLLY HARD to do.)……
RESULTS: I got some really long pauses, followed by a deep breath as if a response was coming and then hesitation, which was followed by another long pause.The results were that 40 % of the girls took a middle of the road position in saying that if they look a it from outside of them selves, they think dark girls can look just as beautiful with blonde hair. They also agreed that no matter what,  she should wear what ever she wants and what ever she finds as beautiful, since that beauty is defined by her.

The other 60% however stood strong, i might add that these were really strong Afrocentric sisters that didn’t even want to wear black hair extensions much more blonde ones.. they unanimously thought that blonde hair belonged on who ever grew it on their heads…………I’d like to add that some of these women had nips and tucks (like breast implants etc) So When I referred to those plastic surgery procedures as not being grown on their bodies naturally, I was either 1) dismissed, 2) told that “it was different” or in one woman’s case, having no defense at all : she just walked away, shook her head and said “Chile Please ,i got things to do”…lol……
So there you have it, if you ever wondered what people think of it, now you know, but I think what i learned most was that “i shouldn’t give a care what people think”, I’m ordering 10 inch blonde for a cute bob…because as i walked around asking what people think, I came to realize over time, MOST PEOPLE DON’T THINK AT ALL, they just say what they assume other people would say…. Beauty is in my eye, because i behold it..